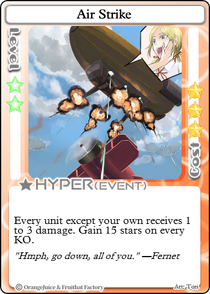 Fernet's Hyper is Air Strike. Air Strike deals between 1-3 random damage to all nonKO'd targets on the board other than the player, granting 15 stars per KO.

Air Strike is a relatively lackluster hyper, that is almost impossible to use effectively. If the player is lucky, it can KO a damaged opponent or opponents that are trying to KO the player. It can also be used to put opponents in a risky situation. Given the importance of the hp stat in surviving heavy damage, losing hp can be especially dangerous when

Boss panels are present on the board, or on a board with the BattlefieldBattlefield
Every 6 Chapters, all

Encounter panels. This effect lasts for 3 Chapters. event. Given the high star cost, the player will ideally want to be far in the lead with regard to stars before attempting such a play, however. Rather unfortunately, it is very difficult to make a star profit with the card. Thus, the player will want to either pair the card with

President's Privilege or hope that all opponents are at low enough hp that the effect KO's all of them in order to generate a profit, however, small.

Air Strike's main disadvantage is that its effect simply doesn't reward the player well for their effort. At a price of 30 stars, the hyper is costly considering its very limited benefits. The card damages at random, resulting in extremely mixed performance that may or may not KO the intended player. Likewise, without a star cost reduction, the returns are minimal. KOing one unit will result in a net star loss of 15 stars, KOing two units will result in a net gain of zero, and KOing all three opponent units will result in a paltry gain of 15 stars. As a result, Air Strike only performs well in very rare occasions where all of Fernet's opponents are near KO, and even with its price reduced, the player will barely make a profit. The card also doesn't give wins either. As a result, the card provides no real advantage for KOing an opponent. The player will almost always take a loss on the card. Consequently, the player may want to bring 1-2 copies of

Mimic with them to receive a broader-use hyper. Opponents are unlikely to copy Air Strike, and Mimic can provide the player with a hyper that is substantially less restrictive and better protects the player.