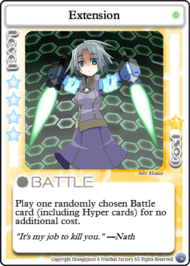 Extension is a 4-star battle card with a potentially high reward relative to its high-risk. Upon activation, any battle card, including hyper cards will be selected at random for the player to use.

Extension is a high-risk yet cheap battle card that randomly activates any battle card including hyper cards. As a result, the card has the potential to be game-changing, if the right battle card is chosen for the given scenario. The card itself has many uses but is ideally activated when the user is out of options, much like

Desperate Modification. If the player needs to KO an opponent or protect themselves from a powerful attack, Extension may provide the necessary battle card to accomplish the task. In the best-case scenario, if a character is playing offensively, they may draw a powerful battle card such as

Accel Hyper or a potentially deadly hyper card like

Blue Crow the Second, or

Deploy Bits. Or, if the character is playing defensively, they may draw an excellent counter card such as

Self-Destruct. The card doesn't just need to be used for emergencies, however. A secondary application for the card can be found with characters with less powerful hypers and characters with limited use hyper cards. Characters such as QP (Dangerous), Sherry, and Yuki, can benefit from the chance of finding a better offensive card for combat and other characters with limited opportunity hypers like Saki and Kiriko can also benefit from Extension as they may play another hyper while waiting to use their actual hyper card. It may be more effective for a player to skip the risk of Extensions altogether and use

Mimic, if they desire another player's hyper card, though.

As one might expect, the main downside to Extension is that its performance is incredibly unpredictable and not necessarily beneficial to the player. If the wrong card is activated, Extension can result in disastrous consequences for the player. At its absolute worst, the player may draw a card worse than nothing. Often, the worst-case scenario for Extension, is playing an unwanted

Final Battle with low health, guaranteeing the defeat of the character who played the card. Usually, the second-worst scenario is drawing a poorly timed

Reverse Attribute Field while on the offensive. More often than not, the player will already have a buffed attack when using the card offensively, and the card will effectively reduce the player's attack to nothing. As a result of the risk, it is generally best to use the card as a last-ditch gamble if the character is faced with certain KO no matter what, or if the results don't matter either way, and the player does not have any better cards to use. While not as catastrophic, the player may also not be so lucky and draw basic battle cards like

I'm on Fire! which will likely yield disappointing results, since Extensions is often played with the hopes of a surprise power play.