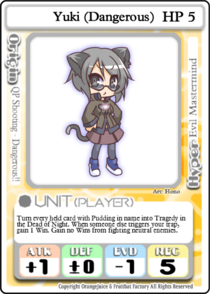 For the alternate version see: Yuki.

Yuki (Dangerous) (ユキ (Dangerous) Yuki (Dangerous)) is one of the playable Characters in 100% Orange Juice!. She was added to the game in DLC 15 alongside dual character, Tomomo (Casual & Sweet Eater).

Turn every held card with "Pudding" in its name into

Tragedy in the Dead of Night. When someone else triggers your trap, gain 1 Win. Gain no Wins from fighting neutral enemies.

Yuki (Dangerous) is a trap-based character. Her passive converts any

Dangerous Pudding cards in hand into

Her downsides are that she MUST get wins off of players in order to achieve Wins Norma. While her Hyper now helps a good deal in achieving that goal, you still have to put a good deal of work in strategic trap setting to maximize your ability to score wins. Her Hyper, while able to bypass trap placement restrictions on cards such as For The Future of the Toy Store & Sky Restaurant Pures, may place traps in less-than-ideal locations.

Pros
+Passive allows for stacking the deck in the player's favor
+Slightly above-average stats
+Wins from traps usually more frequent than Wins from neutrals
+Hyper replaces itself with a trap if you got a Trap card in hand, or fills your hand with Trap cards if you had none.
Cons
-Hyper is unreliable at placing both where traps go, & what kind of traps you set.
-Performance varies significantly from board to board 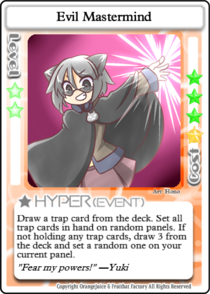 Yuki (Dangerous)'s hyper is Evil Mastermind. When the hyper is used,

(This bypasses any of the traps' requirements)

Surprisingly for both a Hyper card and a multi-effect card, Evil Mastermind has very few uses. Because all traps have no star costs, it can't be used to discount any trap costs. While it does let you play traps earlier than your level should allow, the 13 star cost is a very high cost at Level 2, and

Sky Restaurant 'Pures' (Max 1) is the only 4+ level trap. Additionally, traps are normally more useful when placed at the player's feet than placed randomly on the board, and the player cannot tell what trap was placed if set from the deck using this card.

However, it does have one notable upside:

+ For The Future of the Toy Store & Sky Restaurant Pures can be forced onto the board through Evil Mastermind. Both traps are debilitating for most opponents, as losing 1/2 of your stars is usually a huge detriment.

+ Big Magnum is essential for Yuki Dangerous, as she CAN'T get wins from mobs & bosses.

+ Star-Blasting Light is a back-breaker for Yuki Dangerous, as it eliminates all the traps she placed & will also deal damage to her.

+ Scrambled Eve places the traps in Yuki Dangerous' hand back into the deck, forcing her to re-draw them.

+ Unlike her original counterpart, Brutal Prank is much more detrimental to Yuki Dangerous than it is to Yuki.