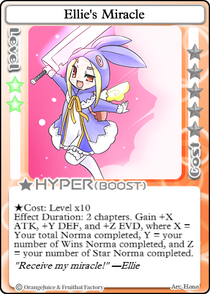 President's Privilege to help offset this card's cost, but only after reaching level 4. The second issue with Ellie's Miracle is that the stat boost it gives is highly dependent on how the player chooses to progress through their Normas. The more beneficial DEF boost is limited to players going for Wins Normas, which are generally more difficult to complete compared to Stars Normas. Finally, the player must rely on their dice rolls and position on the board to get the most out of Ellie's Miracle. A poor attack roll can allow an opponent to survive, whereas a poor movement roll can prevent the player from being able to enter battle at all during the Hyper's effect.