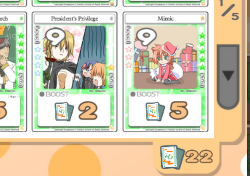 Deck Points are a system are in 100% Orange Juice!'s co-op mode that controls what cards a player can and cannot take against a boss. Cards are sorted into different deck point prices which the player can then add to their deck if they have enough points. This mechanic essentially prevents players from packing too many "powerful" cards, and affects the viability of differently graded characters.

Certain cards have had their effects modified slightly. Some are also unavailable in co-op.

Deck points are provided to the player automatically once they choose their role on the deck builder screen. Each card will have the number of points it cost on its front. The amount of points the player has available is listed under the card selection window. The higher the letter grade/rank the character has in that role, the less points the player will receive to make a deck. Powerful cards generally cost 5 deck points, while more weaker or generic cards cost 0 or 2 deck points. The player can unlock more deck points by leveling up their role. By level 10, the player will have an additional +5 deck points to the base value provided for the role.

All cards cost either 0, 2, or 5 deck points. It should be noted that some cards are not available for use in co-op mode, likely due to being seen as too impractical for co-op. Below is the listing of all cards available and their deck point price: