Difference between revisions of "Dash!" 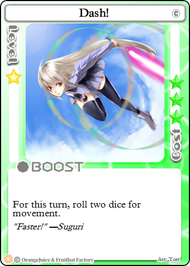 Dash is a Level 1 Boost card acquired from the Base Pack. Upon use, the player gains the Dash! stock effect, which applies a x2 multiplier to the number of dice used in the player's movement rolls for the rest of their turn. This includes the initial roll, as well as any additional rolls caused by

As the name implies, Dash! is a boost card with one purpose: to move the player quickly. As a result, the card is ideal for both offensive and defensive characters as it is perfect for both assaults and escapes.

For bully characters working toward wins normas, such as Yuki and Star Breaker, Dash! is an excellent method of catching up to low HP opponents who are far away or just catching up to the rest of the opponents if the player has fallen behind. By combining Dash! with an offensive battle card such as

Accel Hyper, the player can take out opponents from a great distance, like a makeshift

Accelerator. On the other side of the coin, Dash! is an excellent escape card in most situations. If the player is low on HP, Dash! can easily be used to flee from approaching opponents until the player can reach a

Pudding. It is also useful for skipping dangerous portions of the board, such as areas with a high concentration of

As a result of the two uses for the card countering each other, players should consider whether adding Dash! to their deck will be a help or a hindrance. If the player is using a bully and the opponent draws Dash!, the card can easily be used to run from the player. Likewise, if the player is trying to escape and the opponent draws their Dash! it can quickly lead to a swift KO. The card is also not guaranteed to move the character far. At its worst, the player might roll snake eyes, nullifying any usefulness the card might have held.