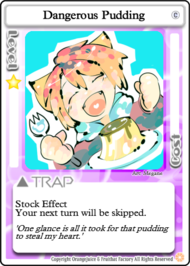 Stock Effect
Your next turn will be skipped.
Level
1 ☆
Cost
0 ★
Limit
3 per Deck
Deck Points

0
Symbol
30px
Illustrator
Megane
Common Card
Base Pack
"One glance is all it took for that pudding to steal my heart."

Dangerous Pudding is a 1-star trap card that causes the victim to skip their next turn, preventing them from moving or playing cards outside of battles for the chapter.

Dangerous Pudding is a trap that is annoying to land on regardless of the victim's stats, abilities, or hand contents. While traps like

Heat 300% can be rendered useless by certain characters (in this case, characters with high EVD) and

Bad Pudding can whiff on a player with a empty hand, Dangerous Pudding is almost always relevant. A skipped turn is a turn not spent collecting stars, wins, or cards. Therefore, it shares a niche along with

Go Away for level 1 traps that affect all characters equally at all stages of the game.

Any character that can play cards can do reasonably well with Dangerous Pudding. Passive characters in particular stand to benefit from it the most by using it to slow down other players while they gather stars. Trap users like Saki and Krila can make good use of this card with their other traps to help hide

Assault over this card due to the immediate combat opportunity it provides. Dangerous Pudding also does nothing to stop players from returning

Home to level up, unlike

Sky Restaurant 'Pures', or even