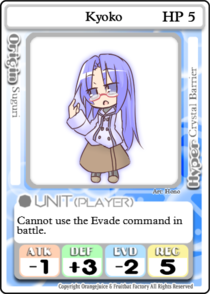 Kyoko (キョウコ Kyōko) is one of the playable characters in 100% Orange Juice!. She was added to the game in DLC 5 alongside Alte.

Cannot use the Evade command in battle.

With a defense stat unrivalled by any other character, Kyoko is the ultimate tank boasting the highest defense in the entire game. Sharing many similarities with Fernet, Kyoko acts as a fortress, able to shrug off most combat damage with high defense rolls. At the very minimum, Kyoko will always roll at least a 4 for defense and a 9 at maximum without any battle cards adjusting her stats. As a result, Kyoko is able to absorb large amounts of punishment and even survive most opponent's Hyper cards if the player rolls well. Plus if the player does choose to use battle cards to increase Kyoko's defense like

Shield, Kyoko defense becomes almost impossible to penetrate, even from Hyper cards such as

Unlike Fernet however, Kyoko's main drawback is that she often is attacked often, rather than left alone, as a result of her passive ability. As Kyoko cannot evade in any scenario, she cannot avoid taking at least 1 damage from every combat, even to avoid an opponent's attack roll of 1. As result, her survivability is substantially reduced: Even with perfect rolls, 5 battles will always end in her being KO'd,

Encounter panels are hazardous as they will quickly chip away at Kyoko's average health stat, and with her below average attack stat she is often not seen as a threat to pursuing opponents. Kyoko's Hyper can also be seen as a disadvantage in some ways, as it is not offensive, meaning that there is no plausible way for Kyoko to fight well or KO opponents quickly- she can only absorb damage with little chance of dealing much back.

Pros
+Highest DEF stat in the game
+Plays at her own pace
+Hyper has 3 stocks
Cons
-Unable to evade attacks
-Extremely poor combat ability: will eventually be whittled down
-Reliant on healing cards
-Relatively unable to rebound from difficult scenarios or reclaim stolen stars
-Very susceptible to 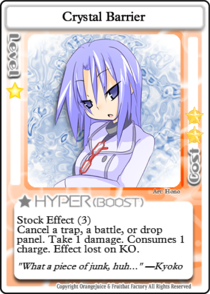 Kyoko's Hyper is Crystal Barrier. When used, the user is given 3 stock of the effect. The Hyper will negate any trap, battle, or drop panel, but at the cost of taking 1 damage.

Crystal Barrier has one main objective: protecting the player from everything. As the Hyper has a low level requirement and relatively cheap price, Kyoko can begin protecting herself very early in the game, giving her an edge against aggressive opponents.

The barrier created by the Hyper has 3 stocks and protects against any form of damage or danger, which makes it very versatile in usage. The Hyper can be used for multiple purposes such as protecting Kyoko during the Battlefield Event, from boards littered by numerous traps, and from attacks if swarmed by enemies. The Hyper can be be best used, however, when Kyoko has low HP. As the hyper costs 1 damage, it can be used like QP's

Hyper Mode to purposely KO Kyoko without losing any stars.

The main downside to the Hyper is that it is not incredibly effective during the late game. As is common with other tank characters, multiple opponents will likely target Kyoko during the closing turns of the game which will likely burn through the barrier fast. If the player is unfortunate enough to roll on too many

Boss panels, or be on a board with the BattlefieldBattlefield
Every 6 Chapters, all

Encounter panels. This effect lasts for 3 Chapters. field event, the effect will quickly be wasted.