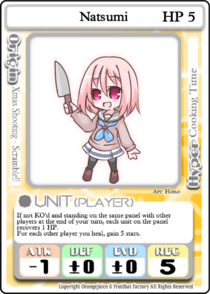 Natsumi (ナツミ Natsumi) is one of the playable characters in 100% Orange Juice!. She was added to the game in DLC 18 alongside Mei.

If not KO'd and standing on the same panel with other players at the end of your turn, each unit on the panel recovers 1 HP. For each other player you heal, gain their Lvl x stars.

Natsumi is the first full-fledged support character with the ability to heal other players. She sports an average statline similar to QP with the only drawback being her negative attack stat. This allows her switch between collecting stars and engaging in combat without much risk to her, the latter complementing her passive. Her passive allows her to semi-passively gain stars as long as she's in the same panel as another player that isn't full HP, so it is a good strategy, if a bit risky depending on the other player's character, to challenge players to a fight for the purpose of lowering their HP, then healing them back up. Fighting characters such as Kyoko (can only defend, has a bad attack stat) or Flying Castle (cannot counter attack) will be most beneficial. It should also be noted than if she's in the same panel as someone who is KO'd, she will regain health. Cards such as

Dinner will also work with her passive, giving her stars for every HP healed.

However, Natsumi faces the trouble of her low attack stat playing against her, allowing characters with high evade such as Aru or Suguri or anyone that has played

Rainbow-Colored Circle to avoid any damage by her, and to strike back harder. Natsumi also cannot heal Kiriko by any means, so having her in the match will cut Natsumi's potential star gain. There's also the obvious drawback that healing anybody in the lead will make them harder to take down, most likely allowing them to reach

Home and win the game safely.

Pros
+Easy self-healing.
+Healing is very easy to trigger, giving her an important star gain.
+Hyper can net her a big amount of stars if played at the appropriate time.

Cons
-Healing enemies can cause more conflict than benefit.
-Negative attack stat can cause difficulty in combat.
-Can't effectively KO someone as she'll heal them back.
-A Kiriko in the match can completely negate any healing and, therefore, any star gain. 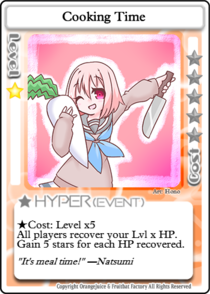 Natsumi's Hyper is Cooking Time. When the Hyper is used, it heals everybody in the board including herself for her level. For each HP recovered, she'll gain 5 stars.

Try to avoid engaging in battle with +2 ATK units if possible! They can tear through your health faster than you can heal with your passive. Units with high Evade can also prove problematic for Natsumi, due to her -1 ATK. Defensive units like Kyoko, Kyousuke, Fernet & Robo Ball are your best bets for the 'attack & heal' strategy.

Cards that attack her stars, such as Flip Out, Scary Solicitation, For The Future Of The Toy Store & Sky Restaurant Pures are especially nasty against Natsumi. Battle cards that boost ATK are also good against her thanks to her neutral DEF & EVD.

- Dinner gives Natsumi 5 stars for every other player she heals! This can result in a slight profit if every other character is not at full HP.

- Sealed Guardian can set up your Hyper for MASSIVE star gain. Best used late game in combination with President's Privilege, as well as on the other side of the board if at all possible.

- Party Time is excellent for dealing with aggressive chasers. It not only ensures they move ahead of you, it also triggers your healing passive & you'll get some stars back in the process (unless every other player is at full health)

- Reverse Attribute Field is great against characters with positive ATK scores as well as bosses.

- Big Magnum & Super All-Out Mode are highly useful against Natsumi, as she has neutral DEF & EVD.

- Scrambled Eve & Out of Ammo prevent her from healing everybody with Cooking Time! or Dinner for a turn. Use this to attack her while she's unable to heal!