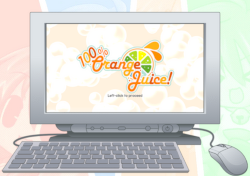 For the best experience while playing 100% Orange Juice! the player should use a keyboard and mouse. The game can be played without a mouse, using just a touchpad or trackpad instead, however. The player should be aware that doing so will likely hinder the user's speed and precision during play, especially during certain events like those in the PlaygroundPlayground
Places several

Minigame panels around the board. These panels will trigger a minigame for any player who lands on them. The panels are then removed at the end of the Chapter. field event which requires quick and precise clicks to do well.

It should be noted that shift and control are only usable in single player and not in multiplayer. The game speed can only be set to speed 4 or less in multiplayer with no ability to increase it further. The player should also be aware that when most events are active, the use of either key while playing alone will result in penalties against the player whether through lowered odds or decreased reward, from the game.