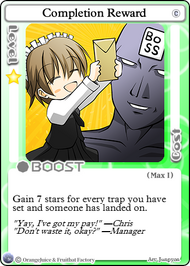 Gain 7 stars for every trap you have set and someone has stepped on.
Level
1 ☆
Cost
0 ★
Limit
1 per Deck
Deck Points
N/A
Symbol
30px
Illustrator
Junpyon
Common Card
Acceleration Pack
"Yay, I've got my pay!" —Chris
"Don't waste it, okay?" —Manager

Completion Reward is a 1-star boost card that gives the user 7 stars for each trap that they have set that a unit has triggered. This includes traps set by event cards like

Completion Reward rewards players for using traps by giving them bonus stars for each of their traps that have been triggered. Placing traps in strategic locations like well traveled

Rbit Hobby Shops not disappearing after they are triggered. Playing more trap cards increases the risk of an opponent drawing a trap from one of his shops and using it to overwrite the shop.

Characters that don't play trap cards in their deck and do not play them via their hyper do not have a reason to play Completion Reward in their deck, as it is a dead card without them. Although it synergizes with her hyper, Star Breaker is the one exception to this rule. Her inability to complete star normas makes the stars less useful than other utility cards like