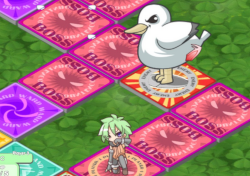 Co-op Bosses take center stage in 100% Orange Juice!'s co-op mode. These super-powered bosses serve as the primary antagonist and key to both victory and defeat for the players. Unlike bosses found in the game's traditional mode, co-op bosses are titan-like characters that have massive pools of health, special passive abilities, and their own deck of cards that only they can use.

As previously stated, bosses in co-op are similar to raid bosses. During the match, the boss characters will play alongside the players as a 5th character. Bosses are powerful and aggressive opponents that will generally attack any player it passes on the board. While every boss is different, they all possess these key characteristics:

For the purpose of this mode, the boss will have a HUD located at the top of the screen in the center. This HUD provides critical information and has the same functionality as a player HUD. The HUD displays the Boss's current HP, selected difficulty, and what card(s) the Boss will play at the beginning of its next turn. Hovering over the HUD will display the boss's unit card, level, current stars, current wins, and active stock effects. This information is always visible to the players, which can enable them to strategize based upon the available info.

Some Bosses also have additional boss-specific information on their HUD.

Bosses begin each match with a special boss deck containing 5 boss cards, which determines which cards the boss uses during the match. The level of the 5 starting cards is determined based on the chosen difficulty, but are otherwise random. At the start of every chapter, the boss will draw a card from their deck, revealing it to the players. Then, the Boss will play that card at the start of their turn. Once a boss has depleted its deck by using all 5 cards, the lowest level card will be replaced with a card which is one level higher, and the deck will be reshuffled. The boss will continue this process for entire game. However, cards will stop being replaced when either 8 replacements have been done, or when the cards cannot be upgraded any higher. Once replacements stop, the Boss will use the same 5 cards for the rest of the game. With the exception of Level 0 cards, a Boss will never have two of the same card in their deck.

On Hyper difficulty, once a Boss's deck is depleted, it will replace a random card in its deck, rather than the lowest level card. This can result in the boss gaining high-level cards much earlier in the game than usual.

A Boss's Hyper cards operate independently from the deck, instead activating based on certain triggers, which vary depending on the Hyper. Unlike standard Boss cards, Boss Hypers can be played at any time, even at the start of a chapter or the end of the Boss's turn.

Co-op features 4 different difficulties for bosses that the player can choose before the match starts: Casual, Normal, Extreme, and Hyper. A number of different factors are affected based on the difficulty chosen.