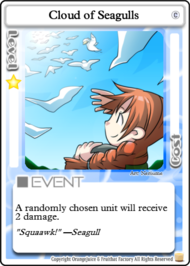 Cloud of Seagulls is a 1-star event card that deals 2 damage to a random unit. Possible targets include the user, allies, and opponents.

Cloud of Seagulls is a riskier alternative to

Long-Distance Shot for players that want to damage their opponents outside of combat. In exchange for increased damage and a reduced star cost, the player loses the ability to choose who the damage is dealt to.

Players who enjoy a little chaos or aren't picky about taking damage will find success with this card. Due to the random nature of it, Cloud of Seagulls has more potential to benefit the user rather than harm them no matter who plays it. Players can even use it as a last resort to KO themselves safely while low on HP, similar to how Yuki uses

Gamble!. High EVD characters may want to run this card for the damage. In Aru's case, she can bring it as an easy-to-play card that makes way for a more impactful

Present for You. Characters like her and Suguri mostly rely on their EVD to keep themselves alive anyways, so being hit doesn't bother them as much as some characters due to their dodge-or-die playstyle. Kiriko also likes to have this card available, as it helps her bring opponents and even herself into KO range for

Final Surgery. Iru can use it to soften up opponents to KO with her passive or

Extended Photon Rifle and often runs this card in tandem with

Long-Distance Shot for the extra poke damage. The Cuties can run this as one of their event cards due to its low level and star cost if they are willing to take a hit every once in a while.

Despite all this, many players may find this card too risky and not worth putting in their deck, preferring safer, more consistent cards. Characters with low base health, such as Nanako and Peat will lose a massive portion of their health if they get hit by this card, so they are discouraged from adding it to the deck. Characters with high REC like Tequila or Sweet Breaker do not want to risk taking that extra damage either, as a suffering a KO means losing a large amount of time to the revive rolls.