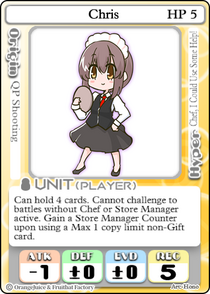 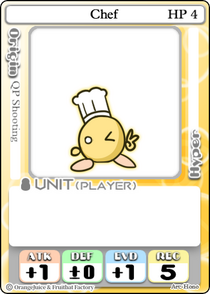 Chris (クリス Kurisu) is one of the playable characters in 100% Orange Juice!. She was added to the game in DLC 29, alongside Kyupita.

In addition, Chris is able to summon the characters Chef (料理長 Ryōri-chō) and a unique version of Store Manager using her Hyper.

As the diligent waitress of Pures, Chris is a summoner character who generally tries to stay out of battle. She sports an average statline with the only drawback being her negative attack stat. This, along with her passive that prevents her from challenging opponents on the field, means that she will take on a very passive role before using one of her Hypers. Unlike other summoner characters such as NoName and Tequila, Chris does not require a specific setup to make opponents fight her minion, as her minion will simply fight in place of her until they are KO'd. It's important to note that Chris and her minion are separate entities, so cards that affect Chris will not affect her minion.

Chef has a statline of 4 HP, +1 ATK, 0 DEF, and +1 EVD, while Store Manager has identical stats to the variety that appears on Boss panels, but with only 4 HP instead of 8.

Chris is generally very deck reliant, as she depends on Max 1 copy limit cards to be able to summon the powerful Manager. Since she is passive initially, she should aim for draw panels first in order to use Hypers and acquire Store Manager Counters, then star panels for norma to level 4. Upon meeting the right conditions of reaching Norma 4 or higher and having 4 or more Store Manager Counters, her Hyper will upgrade to the Store Manager version, which allows her to strike back at the opponents. These minions also help deter players away from challenging Chris and allow her to survive longer. Furthermore, these minions can fight for you when you enter the boss panel, and Chris will not lose her stars if her minion is KO'd, giving her an added layer of protection.

Pros
+Decent amount of HP for survivability and neutral DEF and EVD
+Hyper that deters opponents from attacking you and can also potentially set them back
+Hyper adds a layer of protection to prevent losing stars
+Ability to hold 4 cards
Cons
-Low ATK & cannot challenge while her hyper is not active
-Hypers are very expensive, especially the Store Manager version
-Very specific setup is required to summon Store Manager
-Minions have lower than average HP and can't be controlled (can't heal, can't use battle cards etc.)