Chocolate for the Sweet Gods (2019 Rerun)

Chocolate. Those who had previously participated in this event in 2018 retained their earned chocolate count from before, being able to pick up where they left off. In addition,

Arcade Tokens instead of 3 for the duration of the event.

Sweet Breaker gathers 4 of the Sweet Gods (herself, Tomomo, Saki and QP) to compete in a competition to see who can receive the most chocolate for Valentine's Day, declaring that the one who gathers the most will become the King of the Sweet Gods. She then says that if she wins, she will ban pudding and red bean ice-cream, prompting the other 3 Sweet Gods into action. The biggest problem is that QP, being a dog, will have a lot of trouble with chocolate! Will QP be able to stop Sweet Breaker's malicious plan and protect pudding?!

The goal of the event is to collect 20000 pieces of

Chocolate from matches from the ground, enemies, or other players to complete the event campaign.

In games during the event,

Chocolate, they may travel to their

Home space to store them, preventing them from being stolen. They can be collected in both Singleplayer and Multiplayer, but not while playing Campaigns.

Since the player already gathers chocolate quickly, trying to create a method to gain the most amount of chocolate possible is not necessary because most players will reach the necessary amount with ample time to spare. An easy way to gather a lot of chocolate per match is to do as it follows:

The event also includes a special event-only card that appears in the center deck,

Sweet Battle!, which passively increases the amount of chocolate gathered and helps take more chocolate from other players when used in Battle. A total of 6 copies are added per game. 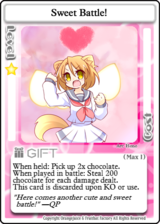 Chocolate. It should be noted that the icon is not a global counter, meaning it only applies to the player. This may seem daunting at first, but a single game can average around 2,000 to 5,000 pieces of

Chocolate. This can be done either in Single Player or in Multiplayer. If done in Single Player, pressing the Control or Shift keys to speed up the game will cause a penalty to be applied to the chocolate total received at the end of the game.

Upon completion of collecting all pieces of chocolate, the player will unlock the ending cutscene, three QP and QP (Dangerous) Pudding Costumes and more random drop items to collect.