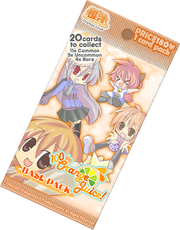 The Cards section of the shop sells card packs the player can purchase with stars to acquire new cards.

At its base, 100% Orange Juice! comes with 4 card packs that the player can purchase, with 3 optional DLC packs available. Each pack contains a unique series of cards. Cards in each pack are classified as Common, Uncommon, or Rare. The chance for each card to be received from a pack is relative to the card's rarity.

Upon purchasing a card pack, the player receives a single card from the pack. For each type of card, only 9 can be received. After the player has received 9 of a single card, that card will no longer be obtainable from packs, increasing the chance to receive other cards from the pack. A card pack is marked "sold out", once a player acquires 9 of each of the cards in the series.

It should also be noted that each save file receives a specific set of 15 cards upon creation, with the set you get depending on the starting character the player chooses.