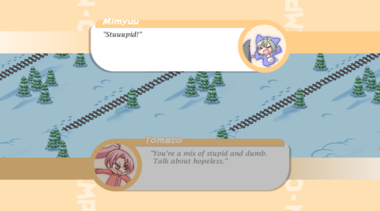 Campaign Episodes are story based matches in 100% Orange Juice!. After selecting an episode the player can either play with the character to provided or they may change their character to whichever one they would like to use.

The five campaigns included with 100% Orange Juice!. The story follows each character on their quest to get back the item Poppo stole from them (with the exception of Suguri). While the story is more or less the same, their are multiple variations between each character's version of the story, and as a result, different dialogue. Each final episode also features it's own unique completion screen. The completion of the final episode in each campaign will unlock a extra campaign episode (and unlock an achievement if the player is on the proper difficulty).

Alongside Version 1.13, the Breaker Pack was released. If it is purchased, two more DLC campaigns are unlocked, based off of the two characters in the pack, Star Breaker and Sweet Breaker. These campaigns follow to separate stories: Sweet Breaker's quest to end war and Tomomo's quest to end Star Breaker's obsession with burning things. Completing these campaigns will unlock another extra campaign, Chaos of the Sweet Gods.

Alongside the Version 1.30 update, the Toy Store Pack was made available. If it is purchased, it gives access to the Crossed Christmases campaign featuring Arthur and Nico. This campaign follows the story of Arthur and Nico doing favors for Aru to help her get ready for Christmas. It is a prelude to the story featured in the Santa Scramble event.

Alongside the Version 2.7.1 update, the Old Guardian Pack was made available. If it is purchased, it gives access to the Old Guardians campaign featuring Suguri (46 Billion Years) and Sumika. The story follows Suguri and Sumika as they play a board game and catch up about their situation. It is a direct sequel to the Girl Power campaign.

Alongside the Version 2.9.2 update, the Wanderer Pack was made available. If it is purchased, it gives access to the Wanderers campaign featuring Ellie and Lulu. The story follows the backstory about how Ellie and Lulu met and how they became friends.

There are a number of standalone extra campaign episodes, each having its own unlock method. In general, these are unlocked after completing certain campaigns, whether they be base game, DLC, or event campaigns.