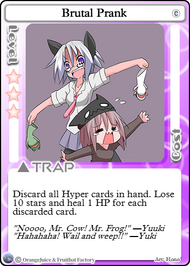 Brutal Prank is a 3-star level trap card with potentially severe consequences for the player unfortunate enough to land on it. Upon stepping on a panel and triggering the card, the player will receive 1 point of HP for each hyper card in their hand, but will also lose 10 stars for each and then discard them.

Brutal Prank is best used against opponents with notably powerful hypers. This includes characters such as Sora and Suguri who can both make powerful plays using hyper cards that substantially boost their attack abilities. It can also be effective against characters who are hyper reliant or semi-hyper reliant, which covers a range of characters such as Kiriko and Alte among many others. Likewise, the card can be worth taking in decks for characters that are not hyper reliant. Tank characters, like Fernet and Sherry, might want to bring the card, as it will prevent opponents from dealing massive damage and will not be much of a loss if the player lands on the trap and loses their hyper card. Additionally, while the norma requirement for the trap is somewhat unappealing, it is actually ideal for its usage, as toward the late game the player may cause an opponent to drop 2-3 cards from their hand. In short, if the player is lucky, Brutal Prank can destroy the opponent's entire late game strategy by removing the most powerful cards from their hand. As a result, it is relatively common for a player to place this trap card on an opponent's

Brutal Prank is far from perfect, as to be expected. The card's key fault is that it is not particularly helpful against low-level hypers that are used early on in the game. It also is ineffective against characters that use their hypers almost instantaneously such as Star Breaker and Krila. Another weakness that plagues the card is the very fact that it is a trap. If the player doesn't draw the card first, it may be used against them or the wrong target may trigger it. Also like most traps, the card features a benefit to the opponent as well by reviving some of their HP. While this isn't much a benefit considering the consequences, it can still pose a problem for the player, under the right circumstances. The most obvious problem, however, is that the trap is completely useless if the opponent who lands on it does not happen to have a single hyper in their hand. Without a hyper, it will deal no damage or pain to the opponent of any kind.