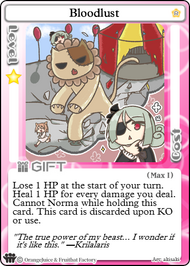 Lose 1 HP at the start of your turn.
Heal 1 HP for every damage you deal. Cannot Norma while holding this card. This card is discarded upon KO or use.
Level
1 ☆
Cost
0 ★
Limit
1 per Deck
Deck Points

Illustrator
akisaki
Rare Card
Community Pack 2
"The true power of my beast... I wonder if it's like this." —Krila

Bloodlust is a gift card that drains the holder's HP by 1 at the start of their turn. In addition, all damage that the user deals will heal them equal to the amount dealt. This includes damage from attacking, card effects like

Long-Distance Shot, and the passive abilities of certain characters. The holder is unable to complete normas while holding this card. Bloodlust is discarded when used or when the holder is KO'd.

Bloodlust is a gift for offensive characters that want to be in combat as much as possible. By healing back the damage taken in combat, Bloodlust allows the holder to survive more fights, especially if they rely on blocking for damage mitigation. Balanced fighters like Kai and more fragile ones like Yuki are able to keep their health at a much safer level with this card, provided that they can find opponents to fight. Store Manager is an excellent user of this card due to his high HP pool paired with his monstrous ATK stat. It should be noted however that Bloodlust will not trigger from to his self-damaging passive when he discards a card. If the player finds them self isolated, it can be better to give up the effect by discarding Bloodlust due to the passive HP drain it inflicts on the holder. Doing so has no penalty other than losing the healing. Sometimes however, it can be better to take the KO, as the user does not lose any stars and won't give wins to their opponents. Kiriko can play this card in her deck for this reason, even though she cannot benefit from the healing passive.

Characters who have no business fighting like Aru should discard Bloodlust immediately unless they are trying to KO themselves by the passive damage on purpose. Tanks like Fernet are harmed by the passive life drain more than others. Their low ATK makes gaining the health back difficult, especially against evasive characters. Bloodlust tends to be less effective on characters with low max HP, like Peat, as they will succumb to the passive damage much faster than other characters if they are not fighting constantly. Highly evasive characters like Suguri will not benefit from this card as much as more balanced attackers, as they tend to avoid most damage that wouldn't KO them outright. Miusaki is a particularly risky user of Bloodlust. Although the healing can allow her to become effectively immortal thanks to her passive and

Solid Witch, she will quickly become vulnerable if not dealing damage constantly.