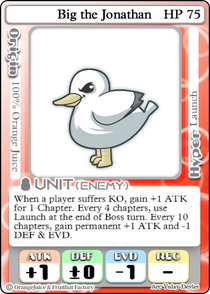 Big the Jonathan (ビッグ・ザ・ジョナサン Biggu za Jonasan) is a special super-powered boss only found in Co-op Mode. It was originally introduced during the Beach Party event in 2018, before Co-op as a mode was formally introduced with the Minions of the Master event. It was later added as a permanent Co-op boss in the Beach Party rerun event.

For the Fighting the Windmills achievement, since you need to deal little damage while surviving extreme amounts of per-turn damage from Big the Jonathan, the Guardian and Supporter roles as well as defensive and healing cards are strongly recommended. A team of 4 Kyokos using the Guardian role can reduce his damage extremely well.