A quiet day at the beach is interrupted when a monster seagull starts his rampage through the shoreline! Will Suguri, Sora, & Hime be able to stop Big the Jonathan before he can eat all the fish in the sea?!

The Beach Party event is the first ever event to feature co-op. Each player will work together as a single team to defeat the boss on the map. Players will not be racing for Norma against each other but will instead reach maximum Norma at level 5. The player will then need to defeat Big the Jonathan to win the game or lose if all players are KO'd at the same time. As the event relies on cooperation, it is quite difficult to complete the event alone, with a CPU player. The complete list of changes are as followed:

Roles a unique way to play in co-op, with each character being designated to a role and rank. The roles are Attackers, Guardians, Supporters, and Avengers each of which features their own special abilities. Each character will receive a rank of A-E and a prebuilt deck to accompany their role. Decks vary based on the character's rank. Generally, the stronger the character's stats, the weaker the cards provided.

A few characters have rather notable changes and passive tweaks that are important for the player to understand when playing in co-op. Certain characters are more or less viable then they usually would be, as a result of these adjustments.

Along with their new deck, player's will also have their normal Hyper card replaced with a unique event only Hyper specific to their role choice. The Hypers are specifically designed to boost the passive abilities of the role and aid the player in defeating Big the Jonathan before chapter 50 after the completion of Norma 5. The Hypers can also be transferred between players with

Gift Exchange. If this action is taken, the Hypers will remain as the cards they were when they were originally drawn. As a result, an Attacker can end up with a Supporter's Hyper.

Big the Jonathan is a special boss on the board, during the event, who will appear anytime the player lands on a

Boss panel. Big has 0 DEF and -4 EVD and his HP starts at 60 by default, however it is modifed by the player's role decision: +5 for each Attacker, -5 for each Guardian, +10 for each Avenger (max 100 HP, min 40 HP). He also starts with a +1 ATK stat that will increase by +1 every ten turns, meaning he can reach a maximum of +5 ATK by Chapter 40. Unlike other bosses, Big also attacks first, unless battling against an Attacker. The player must defeat Big before chapter 50 or survive until chapter 50, otherwise Big will be the victor. 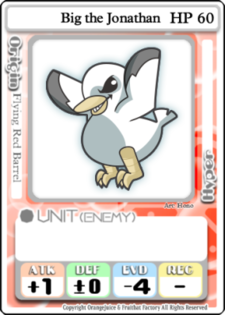 The greatest strength of Big is his secondary abilities. Big can manipulate the game with field events and card effects to greatly harm the players.

Big the Jonathan also brings some special seagull NPCs with him. While there are normal seagulls present on

Encounter panels, the player might also encounter costumed seagulls with different stats. The seagulls are worth 2 wins instead of one.

This event features a global counter on the main menu of the game. As Big the Jonathan takes damage in online games, his global health decreases. Starting at 3 million HP, once a certain amount of damage is dealt, new items were unlocked for all players.