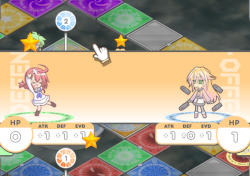 Battle is an essential aspect of 100% Orange Juice! that enables the player to fight both opponents and CPUs for stars and wins. Consequently, battles can have a big affect on the ultimate outcome of the game, especially in the late game when players have more stars or need wins to finish their final norma.

Damage calculation occurs immediately after both players roll their dice. Attacking is always the same process, but whether the defender should defend or evade is a very important decision in the battle.

Stat modifiers refer to the ATK, DEF, and EVD values located on the player's unit card. These values act as buffs and debuffs to the player's roll, by adding or subtracting a value to the player's dice roll. Many different cards can be used to amplify the player's stats during the battle, especially battle cards such as

Shield. No matter the modifier, the player's dice roll can never be decreased lower than 1. Also, if the player has two or more dice, the stat only affects the total not each dice. The player can also only have up to 4 dice at once (dice cap). Below is a table of modifier examples:

Below is an example of damage calculation and stat modifiers in action. It is important to note that the number displayed on screen is after calculation, so Sora roles a 5 but it displays "Attack 6". Likewise Yuki rolls a 1 and 1 added to her -1 DEF modifier is 1 because, as previously mentioned, the player's stat modifier can be negative but the player's roll can never be less than 1:

When any defending character's HP is depleted to 0 in battle, they will be KO'd. The attacker who KO'd the defender will receive 2 wins and half the opponent's current stars. If the player was KO'd by a wild enemy or boss, the lost stars are added to the reward given to the player that defeats it. In general, the player will always receive the stars and wins if they KO another player, however, there are cards and certain effects (for example,

Hyper Mode among others) that prevent the attacker from gaining the rewards upon the KO of another player. There are also characters such as Chicken which will give the winner less stars and wins than normal. The player that is KO'd will enter recovery mode, in which they cannot move and will need to roll to recover. Once recovered, the player can continue moving across the board as usual at the start of their turn.

Below are examples of some the many combat exceptions the player may encounter. Given that many effects affect combat, not all can be listed:

If the player is using the DLC 6 character Sherry the opponent will always attack first, regardless of who initiated the battle or who a card effect says goes first (Sherry's passive specifically overrides all turn order changes).

If the player is using the DLC 20 character Iru, when the player initiates battle, Iru will deal a single point of damage and then the opponent will attack first instead of the player (This effect does not work against Sherry as her passive overrides it).

If the player is using the DLC 23 character Islay, the player will not receive the option menu to initiate battles when passing an opponent. This means the player will not be able to attack opponents to stop on a particular panel and will either need to be attacked or activate a card that initiates a fight. 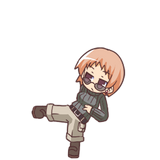 If the player is using the DLC 5 character, Kyoko, they will be restricted to defending every attack, with no option to evade. Although the traditional menu for choosing to defend or evade will appear on screen, the player will not be able to select the evade option.

If the player activates either of the basic pack cards

Little War the battle phase will loop for the specified number of times listed instead of the standard one time. There will not be any other battle card activation phases beyond the one at the start of the battle, however. 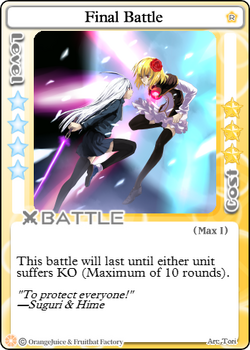 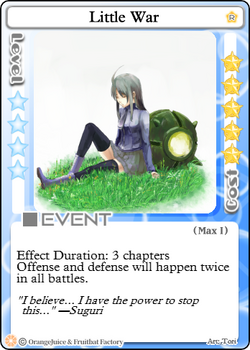