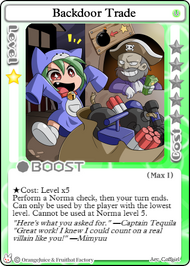 Perform a Norma check, then your turn ends.
Can only be used by the player with the lowest level. Cannot be used at Norma level 5.
Level
1 ☆
Cost
Lvl x 5 ★
Limit
1 per Deck
Deck Points

2
Symbol
30px
Illustrator
Coffgirl
Uncommon Card
Pudding Pack
"Here's what you asked for." ―Captain Tequila
"Great work! I knew I could count on a real villain like you!" ―Mimyuu

Backdoor Trade is a very situational card due to its play restriction: it can only be used by the player with the lowest norma level. Its primary use is to let players who get off to a rough start or have trouble reaching their

Home catch up to their opponents. It can also be used by win-collecting players to allow them to continue traversing the board or pursuing an opponent rather than having to stop to norma. Star Breaker is a great user of Backdoor Trade, as she often wants to put off getting her 4th norma in order to prevent a Boss EncounterBoss Encounter
When Norma level 4 is achieved for the first time by any player, all

Boss panels. While Boss Encounter is in effect, any player who stops on a Boss panel will battle the Boss unit. This event will continue until the Boss unit is defeated. event from taking place, removing her precious

Encounter panels from the board.

Backdoor Trade has no use to a player who is not in last place or is close to winning the game. In such situations, it becomes a dead card in the player's hand that could have been something more useful. Backdoor Trade is more effective for players who are going for win normas, as this card does have a star cost. Players going for star normas have to be careful that the cost of playing the card doesn't drop them below the star level required to norma.