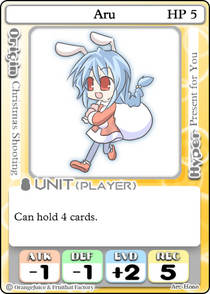 Aru (アル Aru) is one of the unlockable characters in 100% Orange Juice!.

Aru is a star-collecting character based on avoiding combat and damage. While featuring below average attack and defense stats, Aru features a solid health stat and the highest evasion stat equaled only by Suguri and Tsih. These stats enable her to slip through the opponent's attacks with ease, however, the player should be wary of her otherwise fragile stats. As her combat proficiency is poor, she should spend her time avoiding confrontation and instead focus on acquiring stars. Besides her high evade stat, Aru's other advantage is her passive which enables her to hold 4 cards at a time. This aids her in having options and a constant supply of cards to counter and escape her opponents.

The main disadvantage of Aru is her overall poor combat stats. With her low Attack, Win Norma is often not a possibility, and Star Norma will generally be the required method of victory. Also, due to the nature of evade, low rolls will often result in Aru being KO'd, as the player will generally choose evade over defense.