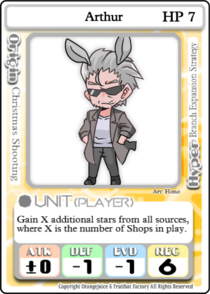 Arthur (アーサー Āsā) is one of the playable Characters in 100% Orange Juice!. He was added to the game in DLC 19, alongside Nico.

Gain X additional stars from all sources, where X is the number of Shops in play 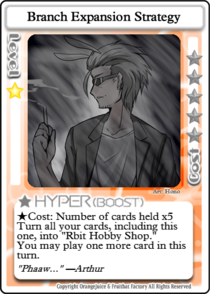 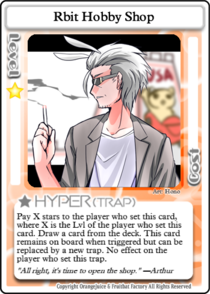 Branch Expansion Strategy: Turn all your cards, including this one, into "Rbit Hobby Shop". You may play one more card this turn.

Arthur's hyper is his main, if not only, form of strategic play.

Rbit Hobby Shop, which is then placed around the board, like a normal trap card. Unlike a normal trap, however, this one does not disappear after being triggered; it remains on the board until the game ends, or until it's replaced or destroyed.

Much like when playing Peat, it is advised that the player wait to use their hyper until they have a full hand, to maximize the amount of Shops. As the stars he steals are directly related to both his Level and the number of Shops on the field, Arthur should focus on setting as many Shops as possible, starting with

Home panels to ensure that no other player can Norma without payment, and going from there. If you're going to be forced to discard as a result of the CharityCharity
Every 5 Chapters, all Players will receive 1 Card at the beginning of the Chapter. field event, or cards like

Present for You that force you to draw cards, one should place a Shop regardless of one's current panel.

Effectively, the trap forces players who trigger it to pay Arthur to draw a card. While the amount of stars stolen per trigger may seem rather minuscule at first, it only increases as the game goes on and Arthur gains more Levels and places more and more Shops, as the function of the Hobby Shops work in direct conjuncture with Arthur's passive. In late game, it can be dangerously effective at preventing other players from achieving Normas.

During the early game, players should focus on landing on Bonus and Draw panels while avoiding active battles, and attempt to play

Branch Expansion Strategy as early as possible. Afterwards, attempt to land on as many

Home panels as you can. After all four are bugged, place Shops on every panel, every turn you can manage. Remember to keep an eye on your Star count, and conserve enough to ensure Normas, as Arthur's low stats make getting Wins difficult.

Arthur has low stats, so he doesn't pose much of a threat to most characters. As such, you should battle Arthur every given opportunity to try and wear down his high health. His large recovery roll will also all but ensure that he stays down for multiple chapters per death. Keep in mind that his attack is at least base, and he can still kill easily with good rolls, so use caution.

Star-Blasting Light can completely shut Arthur down in the late game. Also like other trap-based characters, Kyoko is a direct counter to Arthur, as

Crystal Barrier will eliminate Shops from play, the same as Stiff Crystal.

- Pudding is highly recommended for Arthur to help keep his HP as high as possible.

- Quick restoration is another must have card for Arthur thanks to his high HP.

- Reverse Attribute Field is useful for dealing with aggressive bullies looking to chip away at your health.

- Star-Blasting Light will eliminate ALL of Arthur's Hobby Shops & deal damage to him, KOing him if his health is less than the number of Shops blasted away.

- Bringing traps of your own can give you an opportunity to close his shop & replace it with a trap card of your own.