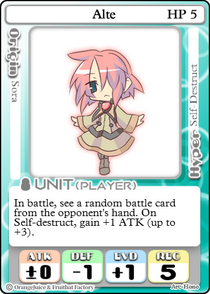 Alte (アルテ Arute) is a playable character in 100% Orange Juice. She was added to the game in DLC 5 alongside Kyoko

Alte is an unusual character centered around a powerful Hyper and passive ability combo. Similar to Nath, Alte requires some setup to truly shine. When beginning a match, Alte starts with less than impressive stats, similar to Hime but without the ATK boost. As a result, the player may be bullied very early on, so the player should focus on reaching Norma level 3 and landing on either

Draw panels to secure a Hyper and stars to level up. Once the player has a Hyper, Alte's game more or less begins, as Alte's build is solely built around her Hyper. With each successful use of

Self-Destruct, Alte will gain a permanent boost to her ATK, that will make her more competent in battle. On the rare chance that the player manages to land 3 successful detonations, Alte's ATK will become the same as Tomomo (Sweet Eater). The Hyper will also result in large star losses for the opponent, which helps to push Alte further ahead.

Blue Crow the Second and respond with

The main downsides to Alte, however, are her extreme Hyper reliance and rather frail stats. Without her Hyper, Alte can be picked on easily if the player consistently rolls poorly for evasion or defense. If the player is unable to successfully draw a Hyper, the risk of Alte being KO'd will increase the more the match progress, especially if it becomes obvious to the opponents that the player does not have the Hyper.