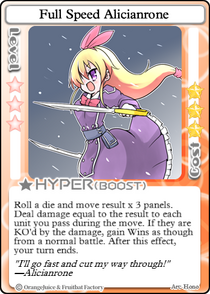 Roll a die and move result x 3 panels. Deal damage equal to the result to each unit you pass during the move. If they are KO'd by the damage, gain Wins as though from a normal battle. After this effect, your turn ends.
Hyper Info
Effect Type
Boost
Level
3
Cost
30 ★
Symbol
[[File:|30px|link=]]
Illustrator
Hono
"I'll go fast and cut my way through!" - Alicianrone

Alicianrone's Hyper is Full Speed Alicianrone. When used, the player is prompted to roll a die. The player will then move a number of spaces on the board equal to the result of the die roll x 3. Any opponents passed on the board during this movement will take damage equal to the result of the die roll. If they are KO'd by this effect, the player will earn wins equal to the amount earned from a normal battle with that unit. Despite what the card says, the Hyper only skips the move roll phase and not the whole turn, meaning panels are still triggered when landed on.

The initial die roll and subsequent movement prompted by the Hyper is not affected by any dice-increasing or movement roll effects. However,

If an opponent damaged by the Hyper is not KO'd by its effect, they can be challenged to battle as normal. This will end the player's movement and trigger the current panel as with a normal move roll.

One downside of this is that how powerful this card is entirely depends on the die roll. A weak die roll will render this card ineffective, especially for its high star cost. The hyper can also be interrupted by cards like

Immovable Object. Due to its high star cost,