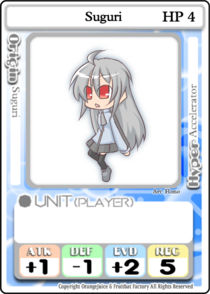 Suguri (スグリ Suguri) is one of the four starting characters in 100% Orange Juice!, that the player can select when creating a new save file. She originates from the game SUGURI in which she was the title character.

At over 10,000 years of age, Suguri is the protector of the earth, ready to fight those who would harm it with a mix of speed and power. Suguri features a specialized build, constructed around a rare, powerful +2 evasion and a slightly buffed attack stat to compensate for her below average health and defense stat. Suguri is unique in that she is the only character with a +2 evasion and positive attack value, which gives her a combat edge not afforded to any other unit. With these stats, Suguri is able to use a hit-and-run strategy against opponents, fight repeatedly against weaker opponents, often times dealing decent damage and escaping without even a scratch. In particular, Suguri can easily dominate heavily defensive characters like Fernet with endless bullying, as she will more than likely be able to evade their counter-attack, thanks in part to their debuffed attacked stat. Likewise, most

Encounter panels will not be too much of a problem for Suguri, as long as the player rolls wells enough to KO the opponent or dodge them if they fail. Suguri also has the advantage of being one of the characters that benefits the most from the battle card

Rainbow-Colored Circle, which enables her to dodge even the most vicious of attacks, like those of a boss. She also features a decent late game, with a hyper can be used to deal a massive amount of damage if timed properly or combined with another card for maximum effect.

While her main strength, Suguri's main weakness also stems from her stats, which come out at a rather unfortunate price. Suguri's power output and evasion ability are only exceeded by her fragility, as her slightly below average HP stat is further exacerbated by her debuffed defense stat. As a result of her stat spread, powerful opponent attacks are particularly problematic for Suguri, forcing the player to often think over the pros and cons of evading, as they stand to lose a great amount of progress if they fail to evade. The player will need to understand their defense and evasion odds better than other characters when faced with a high opponent roll, as it might be a game defining combat. For instance, if the opponent rolls a 5, Suguri will have a 50% chance of being KO'd if she evades because the player will need to roll at least a 4 for her buffed evasion to protect her. If she defends instead, she will have a 33% chance of being KO'd, as the player must roll at least a 3 to survive. Thus the player should generally try to avoid combat with opponents who are not already injured and dodge

Boss panels when without a hyper, to avoid the possibility of being KO'd.

Like most characters in the cast, Suguri should generally aim for star norma but she can play either side depending on the player's luck and the board. If the player is having particularly good RNG, wins norma may be possible, but should not be considered the main method of victory. Early on in the game, evading and starting on the offensive is more advisable as the player will not fall back much from being KO'd and has the possibility to gain a lead over other opponents. In the late game of norma 4 and beyond, Suguri can use her hyper to defeat other players who have collected a large number of stars to put herself back in the lead or defend herself likes of bosses and pursuing opponents. 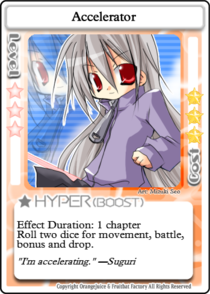 Suguri's Hyper is Accelerator. When activated, Accelerator enables the unit that played the card to roll 2 dice for all actions during 1 chapter. (1 chapter means from the end of the player's turn to the beginning of their next turn)

Accelerator is a potentially very powerful hyper card, that can act as both a deterrent and a powerful weapon. By adding a second dice for all rolls, the hyper enables the player to perform multiple actions such as catching far away opponents, overcoming most opponent's defenses with a powerful attack, and escape unharmed with a very high evasion roll. As a result, the hyper is generally used for one game-changing power play where the player uses the card to overpower the current game leader or Boss and take their stars. For best results, however, it is generally best practice to pair the hyper with additional event or battle cards to increase the opponent's odds of being KO. Cards such as

Little War can give the player a huge advantage when paired as they will extend the amount of time the opponent spars with the player. Or for a more direct assault approach, the player can use

Accel Hyper alongside Accelerator to practically guarantee the opponent's defeat with 4 dice. Either way, the player can make it extremely difficult for the opponent to survive the match either through extending the battle or through raw force. Accelerator can also be augmented with certain board effects such as SprintSprint
Every 6 Chapters, all players roll a base two dice for movement (up to 4 if using a card increasing your role). This effect lasts for the duration of the Chapter. or the double dice effect from PlaygroundPlayground
Places several

Minigame panels around the board. These panels will trigger a minigame for any player who lands on them. The panels are then removed at the end of the Chapter. which will both give 4 dice for an action. The hyper can also act as a major deterrent against opponents, as any other character that attacks the player during the chapter that the card is activated will have to contend with two dice when fighting. Better yet, sometimes opponents forget the effect is active, and attack the player, further increasing the odds of the player KOing the opponent. A player can maximize the use of Accelerator by attacking multiple opponents in one turn, where the effect is active in all her fights. Lastly, since Accelerator does not adjust the player's stats, it the card has the added bonus of being immune to the effects of

Accelerator, while powerful, does possess some key downsides, however. While the two dice for all actions mean great potential for high attack rolls, it is only potential, not guaranteed as the hyper doesn't affect the player's stats. If the player is particularly unlucky, they may be unfortunate enough to roll snake eyes for attack or movement and fail to either reach, defeat, or survive the opponent. As a result, it may still be best to activate the hyper when the player is very close to the opponent they want to attack. The hyper is also extremely expensive at a price tag of 30 stars.

President's Privilege is beneficial in lower the cost but will result in the player using their entire hand to make a combo, leaving them vulnerable if an opponent approaches, especially in the late game. Also, since the hyper does not boost the player's stats in any way, it is notably countered by Sham's hyper

Delta Field which will cause Accelerator's double dice to become completely useless.

When the player begins a new game and selects their starting main character, they will receive the cards necessary to create a deck. If a players chooses Suguri as their starting character, they will begin the game with the provided 15 cards along with Suguri's unit card and hyper card. In concurrence with Suguri's stats, Suguri's starting deck is constructed around speedy movement, evasion, and combat modifiers.