Acceleration of SUGURI (アクセラレーション オブ スグリ) is a single player and multiplayer video game developed by Orange_Juice. The game is a direct sequel to SUGURI, but unlike the previous game, if features a duel-style shoot 'em up method of play. Matches consists of two characters fighting to deplete the health bar of the opposing character, with the player controlling one of the characters.

Shortly after the events of SUGURI, it was the day of a sacred holiday of the Earth. A holy night where an old man in red flies across the sky. Suguri and the rest of the Shifu Brands are preparing for a party to celebrate at night. Nanako, Kae, and Iru are in charge of decorating while Saki and Kyoko are in charge of cooking. Suguri asks Hime what should they do since all the jobs are taken up. Hime tells Suguri that this party is dedicated to Suguri, everyone caused trouble for Suguri in the previous game and this party is to show gratitude to her. Suguri asks Hime how she was allowed to go against Shifu's orders, unlike the others, and Hime responds that she was the ship's guardian, she was different from the others. Hime and Suguri then get bored, having nothing to do, and Hime hopes a miracle will happen since tonight is the night of miracles.

Suddenly, NoName appears and Suguri mistakes NoName for Shifu and is shocked and wonders how Shifu could have survived her final attack from the previous game. Hime points out that NoName seems different from Shifu and Suguri asks who NoName was. NoName tries to answer Suguri's question but could not because he does not know his name. Kyoko explains that NoName is a robot created by Shifu. Shifu had intelligence but lacked strength, so Shifu created NoName to control more power, however Shifu could not stand coexisting with a clone of him, so NoName was sealed away. Suguri asks NoName if he does not pose any threat to them and NoName responds by demanding Suguri to call him "Nice guy" instead. Kyoko answers Suguri's question by saying that NoName can be dangerous because the Shifu Brands were modified so that they could not oppose Shifu's orders and they recognize this authority by Shifu's face and voice, which the clone, NoName, possesses. NoName, having heard Kyoko, is excited having found his true purpose, to create a harem. Kyoko pleads Suguri to help, so Suguri tries to convince NoName to join in on their party instead but NoName refuses. NoName cites his supposed Granny, saying that there is no greater pleasure than playing with women. NoName wants to use the groups knees as headrests, chairs, and beds. Suguri demands NoName to stop before she becomes angry and NoName insults Suguri by calling her shorty in response. NoName orders the Shifu Brands to fight Suguri and Hime.

After subduing the Shifu Brands, Suguri asks NoName to stop all of this fighting. NoName becomes upset that his goal of creating a harem is so close but now stopped because of Suguri and Hime. His dreams of sleeping on the knees of Kyoko that night are ruined, all of his dreams of romance are now over. NoName now does not care if Suguri is a shorty anymore, he wants to defeat Suguri to have her knees for himself. Suguri beats NoName and NoName calls Suguri a cheater for flying around with a skirt and he could not help but peek up her skirt. NoName then daydreams of sleeping on Suguri's knees and peeking up her skirt. NoName calls Shifu Robot to fight Suguri as a last attempt to claim her knees, but Suguri beats the robot. Suguri detaches NoName's head from his body and placed it on top of a flower pot, this pot is now his prison.

At night, the party was being held. The Shifu Brands apologizes to Suguri and Hime for being forced to fight them, Suguri and Hime tells them that this was not their fault. Suguri thanks the group for forming a great party and to not worry paying her back for all the trouble they caused.

During the party, Suguri wonders out loud why is the space ship still apparently operation since NoName came from it, and that she destroyed it in the previous game. Hime answers that maybe it is because of a miracle from the night of miracles, and everyone laughs.

Shortly after the events of SUGURI, Saki has created one pudding and is upset that this is not enough to share with everyone. Nanako asks why Saki could not just make another and Saki explains that there are just not enough ingredients. Iru, Kae, Hime, and Suguri are upset that this pudding cant be shared but then Kyoko suggests just to fight for it. Saki argues that she made the pudding with her own hands and that she should have it, she wants to experience what pudding is like. Saki pleads for there to be no fights and to let her just have the cup of pudding. Everyone then agrees to just fight Saki for the cup of pudding and they all attack Saki.

After beating everyone in battle, Saki hears someone asking her if she wishes to obtain pudding. This person explains that pudding led countries to ruin and brought confusion and sacrifice to the world, and this person asks if Saki still desires pudding even after all of this. Saki responds that she did not come this far to give up, she says that even though she just fought with her friends, its not the cup of pudding's fault, the cup of pudding did nothing wrong. Her stomach craves for the pudding, and she will eat it with no regrets. The mysterious person sees that Saki truly desires pudding and reveals herself as QP and announcing that Saki will have the pudding over QP's dead body. QP introduce herself as the pudding deity, she was born from the wishes of pudding creators of the past to not let pudding cause so much havoc ever again. However, QP knew that deep down, these wishes that brought her birth were actually wishes for pudding to bring happiness to others again. This is why QP has appeared, to not let pudding cause destruction, only happiness. QP fights Saki to see if Saki truly wants to eat Pudding, Saki must overcome QP as a final test to see if Saki can show the pudding to happiness.

After the battle, QP says that Saki's desire is not strong enough to grant the wishes that gave QP life. Saki is worried that fighting anymore will leave QP in a worse shape than she is in right now. QP says that Saki must finish off her in order for the pudding to find happiness in Saki. QP tells Saki that she is destined to disappear anyways, QP and Saki are very similar in character and they cannot be together for long. QP convinces Saki to not hold back or she will regret not being able to eat pudding forever. QP thanks Saki for finishing her off and Saki blasts her with a big bang bell.

Saki eats the cup of pudding, but then it is revealed that all of this was just in her dreams. 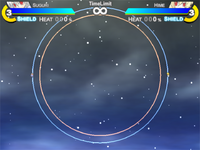 Stage arena of Acceleration of SUGURI

In Acceleration of SUGURI, the matches take place inside a circular airborne fighting arena. Characters cannot leave the arena and are bounded inside the arena. Moving along the edge of the arena drains the character's hyper meter. Eleven selectable stages animate the background of the arena stage, with most of these stages being based off of stages from SUGURI.

Story-wise, the overall setting of the game takes place in the same setting as SUGURI. The inhabitants of the spaceship from the previous game have now settled on the Earth, coexisting with the natives. Despite Sora being a playable character, the game takes place before she wakes up and meets Suguri and Hime in Sora. This is supported by the fact that she does not have any speaking lines outside of extras, so Sora simply serves as a sneak peak into Orange_Juice's future game.

1 add-on has been released for Acceleration of SUGURI, which is music from the game.[7]